OBSERVED: In early May, 2003 I visited the Interlake area of Manitoba, Canada to investigate several bigfoot sightings. There were two sightings just prior to my arrival at the Fairford Reserve, which lies along the Fairford River and Lake St. Martin. One was just two days prior, and the other about three weeks before that. A report has been filed on the most recent sighting, which occurred May 2.

The sighting I will report upon here occurred around April 10, 2003 at the Fairford grade school, which is about 2 miles from where the May 2 sighting was. I visited the witness, a teacher at the school who appeared to be about 35 years old, at her home, which sat next to the school, within the school campus; an area of maybe two or three acres holding the school building, two houses, and assorted structures and play equipment. A gravel road ran along the front of the campus and a chain-link fence enclosed the other three sides. The chain-link fence was six feet high; three strands of parallel barbed wire at the top brought the total height to seven and a half feet. Bush lay beyond the fences.

At one or two in the morning the witness was awoken by the sound of the dogs barking. She got up and looked out her front door to where they seemed to be focusing their attention and there was a “very large man” on the outside of the fence facing her; he was apparently hanging from the fence – that’s how it appeared to the witness. He was holding onto the top strand of barbed wire and the top of his head was even with that strand, so the witness concluded he must be holding himself up, hanging there. The fence, and the “man” were only about 25 yards from where she stood out looking from the top of her front stair, and a light at the top of a telephone pole illuminated the scene fairly well.

There was something very odd about the man, the witness said, he didn’t move and it looked as if he wore a hooded cape because his head shape flowed down to his shoulders without any constriction where his neck should be. She looked and looked as the dogs barked madly and suddenly the thing made a sound “like when a cow coughs,” repeated four times. She called the police. When they arrived with their spot lights it had gone and the dogs were directing their attention toward the area over the back fence, then back again along the side toward the front. Then the dogs quit. The police never saw anything.

The witness said, despite her best efforts to minimize the incident and suggest it was a man (though she no longer thought so herself) to her students, several of them got around the fence to where the thing had been standing and found big barefoot prints in the patchy snow. The tracks were destroyed by the discoverers and kids who followed so the witness wasn’t able to get a look at them.

When I asked the teacher what she thinks she saw she said she didn’t know, but she didn’t think it was a man. The outside light was not bright enough that she could see details of the thing, but she said it was uniformly dark in color. The witness seemed intelligent and it was evident she had no interest in bigfoot. What ever she saw was about seven and a half feet tall; it stood on the bush side of the fence looking into the school yard in the very early morning; it made the sound of a coughing cow, and, according to her pupils, it left big bare footed tracks.

ALSO NOTICED: Sighting report submitted by Curt Nelson, BFRO Curator. Based on interview with witness at her home on May 5, 2003.

OTHER WITNESSES: 1
Was sleeping then awoke to dogs barking

OTHER STORIES: Yes. Another sighting in area three weeks later (May 2, 2003)

This photo shows the fence from the position the witness was in. The man in the picture is six feet tall and is standing inside the fence. The creature was in the same place but on the outside. Three strands of barbed wire extend above the chain-link portion of the fence - above the top of the man's head.

The support cable seen on the right side of the picture is attached to the tall "telephone pole," which held the lamp that illuminated the area. 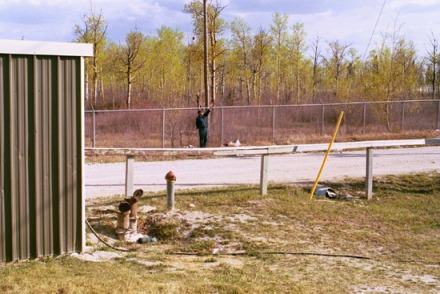