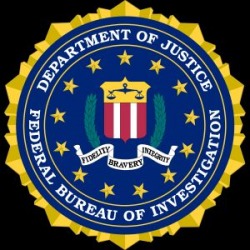 Does the FBI have files on Bigfoot? You bet!

Obtained From The FBI Freedom of Information Files - Bigfoot

Bigfoot and the FBI
by Christopher L. Murphy In July 1975, The Washington Star-News carried an article
in this regard of which the following is an excerpt:
RECOGNITION AT LAST

Though conceding that his existence is "hotly disputed," the Army Corps of Engineers has officially recognized Sasquatch, the elusive and supposed legendary creature of the Pacific Northwest mountains. Also known as Big Foot, Sasquatch is described in the just-published "Washington Environmental Atlas" as standing as tall as 12 feet and weighing as much as half a ton, covered with long hair except for face and hands, and having "a distinctive human-like form." The atlas, which cost $200,000 to put out, offers a map pin pointing all known reports of Sasquatch sightings, and notes that a sample of reputed Sasquatch hair was analyzed by the FBI and found to belong to no known animal.

The last piece of information, that concerning analysis of hair, prompted considerable interest in Bigfoot research organizations and with individuals interested in the Bigfoot field. The issue was investigated by Peter Byrne of the Bigfoot Research Project in Mount Hood, Oregon. Byrne wrote to the FBI stating: "Will you kindly, to set the record straight, once and for all, inform us if the FBI has examined hair which might be that of a Bigfoot; when this took place, if it did take place; what the results of the analysis were."

The FBI replied to Byrne's request as follows: "Since the publication of the "Washington Environmental Atlas" in 1975, which referred to such examinations, we have received several inquiries similar to yours. However, we have been unable to locate any references to such examinations in our files."

The FBI did, however, follow-up with a Dr. Steve Rice, who was editor of the Army Atlas. In an official report, the FBI states: "After checking, Dr. Rice was unable to locate his source of the reported FBI hair examination."

While this whole affair virtually led nowhere, it did enable Peter Byrne to get the FBI to do an analysis on 15 alleged Sasquatch hairs attached to a minute piece of skin that Byrne had acquired. The result of the FBI examination was that the hairs were, "of deer family origins."
The foregoing information on the Army Atlas and other information relative to the FBI was obtained by Jody Cook under the Freedom of Information-Privacy Act. Jody wrote to the FBI and requested all information relative to Bigfoot. He received documentation that primarily deals with the Army Atlas and subsequent analysis of the hairs submitted by Peter Byrne as we have previously discussed. There was nothing else of any significance in the file. However, it appears there is always a little "mystery" whenever the FBI is involved in anything. Attached to the file sent to Jody Cook was a standard pre-printed "Dear Requester" form. Curiously, a box on this form which states, "See additional information which follows" is checked. At the bottom of the form the following information was manually typed-in:

"Enclosed are previously processed documents which relate to "Big Foot." The enclosed are the best copies available. Serial 4 is missing from file 95-213013, the file where your release originates. Our effort to locate that document was not successful. It is possible that the number 4 was missed during the original serialization of the file."

We are left to wonder what was in Serial 4. Certainly the FBI would be a little more efficient in their filing procedures to omit this section. We have, however, learned that analysis of hair samples as indicated in The Washington Star-News article definitely took place.

Also, that the samples could not be identified. George Clappison did extensive research on this incident and was referred by the FBI to the ex-head of their Hair and Fiber Unit. This person, who now runs his own private laboratory out of his home, was in charge at the time the hair samples were submitted to the FBI.

He told Clappison that the analysis was done after hours on employees' own time. He further stated that no written reports were prepared on the analysis. In discussing the whole situation with the current head of the FBI Hair and Fiber Unit, Clappison asked if the unit would now consider analyzing other hair samples. The current manager agreed to perform an analysis, however, he informed the unit would not respond in writing on their findings.