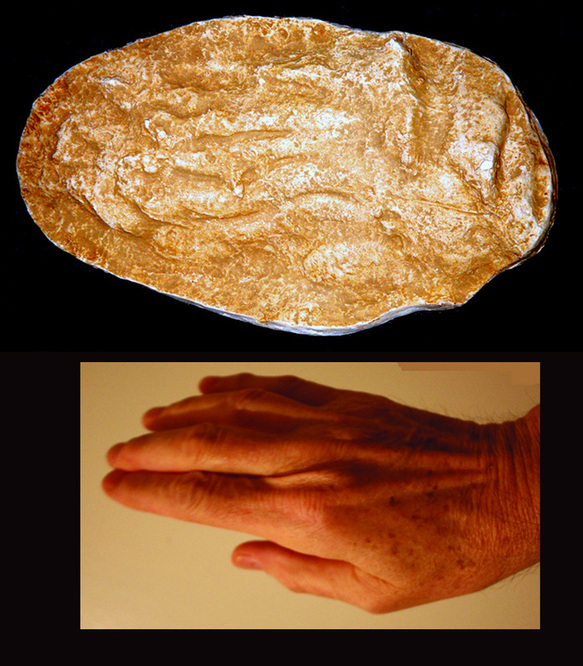 A hand print found in mud at the bottom of a shallow pool on Onion Mountain, California, by Bob Titmus in 1982.  Titmus drained the pool to get a cast of the print.  A human hand is shown to illustrate how the print was positioned.

Blue Mountains, California
The illustrated casts of a hand print and a knuckle print were made from impressions found by Paul Freeman in the Blue Mountains, Washington.
The hand print was found in 1995, and the knuckle print in 1982.  A  footprint, 16 inches long, was found near the hand print. The human hand shown is that of a large man, about 6 feet tall and weighing about 215 pounds. (It needs to be noted that the knuckle illustration should be that of a left human hand rather than right.)

Concerning the hand print, Dr. Henner Fahrenbach states that the accompanying footprint indicates a creature about 7 feet, 4 inches (2.2 m) in height. His analysis of the hand print is as follows: The fingers may appear shorter and more pointed than they are in reality since sand had started to drift down into the holes left by the fingers. The print is remarkable for the absence of the thenar pad (the bulge at the base of the thumb) and the visibility of the finger tendons within the palm if the cast is held at an angle to a sharp light, both factors indicating a low level of opposability of the thumb. Its width at the palm is also fairly low in comparison to the largest, though less complete, prints that have been found. 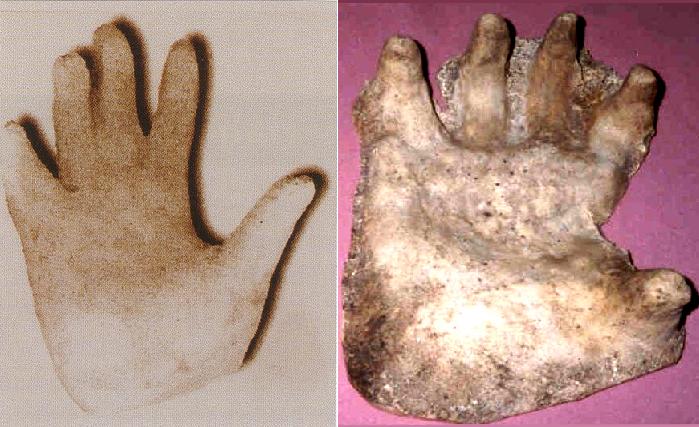 A scaled comparison between the cast of a human hand and the alleged sasquatch hand cast. The human cast has been photographically enlarged to match the size (height) of the sasquatch cast. The difference in the appearance of the casts is highly obvious.
Fort Bragg, California
Gallery Navigation
​
All images in this presentation are  from the Murphy/Hancock Photo Library or other restricted sources and are under copyright where applicable.
Please contact <sales@hancockhouse.com> for details on usage.